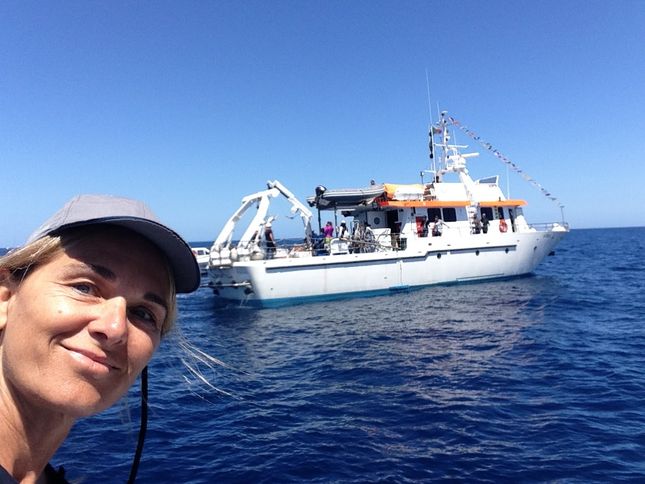 Interview with Salud Deudero, researcher from the Balearic Centre of Oceanography (COB)

Ignasi: Good morning, Salud. How are you? First of all, thank you for sharing your time with us. Could you briefly tell us more about yourself?

Good morning, it’s a pleasure to be here with you. My name is Salud Deudero and I’m a researcher from the Balearic Centre of Oceanography (COB) , a public research institute based in Palma de Mallorca (Balearic Islands). I’m a biologist, with extensive experience in marine studies and I’m involved in several projects related to marine litter issues.

Ignasi: One of the projects you’re involved in is Plastic Busters MPAs, isn’t it? This summer, you participated in the very first scientific expedition with this project, in your MPA. Could you tell us more about this experience?

The Plastic Busters MPAs project expedition we carried out focused on assessing microplastics in the water surface , and also on sediments. The ingestion of microplastics by some fish species, sea urchins and holothurians, was also investigated.

We looked at how much marine litter, micro- and macro-plastics was found in the park, but also what has been ingested by some species that may be of interest in the park.

A team of six researchers from the COB -IEO, in collaboration with the staff of the Cabrera Archipelago National Maritime-Terrestrial Park, were involved in the scientific expedition.

Ignasi: Is the presence of litter in the marine environment a real problem in Cabrera National Park?

Yes, it is very problematic, because Cabrera is affected by marine currents that are bringing marine litter in from other areas. We have been sampling in Cabrera for many years, studying endemic species, and when we were looking at the marine life we discovered lots of plastics on the seafloor but also floating.

Ignasi: The expedition took place from 29 July to 6 August. What was the day-to-day experience like onboard?

Our daily activity was really intensive because we were combining diving with sea surface sampling. This was done in shallow waters (from 5 to 10 m) for the first time in Cabrera to assess how much marine litter there was, and we really found a lot.

Five types of surveys were carried out in this campaign:

–       Marine litter on the seafloor. In shallow coastal waters, seafloor marine litter was quantified by scuba divers. The divers collected the litter items found in the studied transect of the seafloor and measured and classified it ashore.

–       Simultaneously, while surveying marine litter on the seafloor, marine litter was sampled from the water column. To this end, the scuba divers used a hand-held trawling net to collect floating microlitter in the hyperbenthos.

–       Marine litter on beaches. Micro and macrolitter was surveyed on sandy and rocky beaches to assess the accumulation of litter and understand the transport patterns of litter to Cabrera.

This was done in different areas of the park. We had to replicate the sampling to identify the spatial distribution, but also because the park has some areas that are closed to human activities and we wanted to compare these areas with the Cabrera harbour and other areas that are accessible to tourists to establish whether tourism has a direct impact on the park and the marine litter we can find.

Ignasi: Tell us more about sampling the seabed with divers. What kind of challenges did you face?

The divers covered short undersea transects, collecting all the marine litter, which we then categorized and classified by typology and also by weight and size.

We also looked at the predominant type of habitat (seagrass bed, rocky areas..) in the transect we were analysing.

We have to analyse the results, but we think this is a very good methodology to assess the macrolitter in shallow waters, because most of the time we just focus on what is on the beach but we are not focusing on what is on the seafloor.

Ignasi: What are IEO’s next steps within the PB MPAs project?

We have to start analysing the amount of litter ingested by all these species, but also the response of biomarkers and the presence of plasticizers to see the effects on the organism.

We are trying to obtain a complete vision of the ecosystem, looking at several species that have different roles and functions in the marine system.

Hopefully, the next expedition will be in the winter. Although the conditions are worse for the divers collecting samples, we feel it is important to compare the results obtained in high summer with those from winter, which we expect to have less marine litter.