The Plastic Busters MPAs demo in the Thermaikos Gulf Protected Areas concludes with the recovery and recycling of 7.5 tonnes of derelict mussel nets 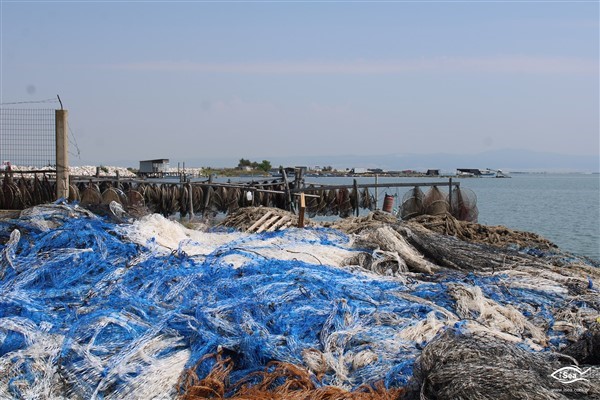 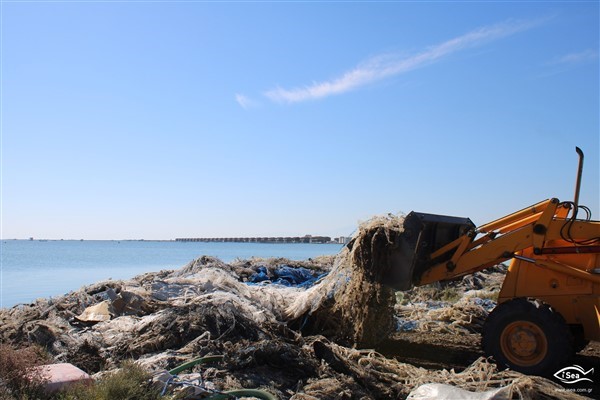 Almost one year ago, Plastic Busters MPAs and MIO-ECSDE kicked off a marine litter prevention and mitigation demo in the Thermaikos Gulf Protected Areas (Greece). This demo aimed to showcase how a derelict fishing gear management scheme can be established and how the sustainable management of such gear can be ensured with the involvement of the fisheries and aquaculture sector.

According to the Coordinator of the Management Body of the Thermaikos Gulf Protected Areas, Ms Athina Panagiotou, derelict mussel nets are a major issue, not only for the Chalastra area but for the entire coastline of the western part of the gulf, which hosts a large number of marine mussel farms and is responsible for almost 80-90% of the national mussel production, making it Greece’s largest mussel production area.

Due to the intense mussel farming activities in the area, high volumes of plastic waste from mussel nets are being generated and mismanaged. Large amounts of these nets are being discarded at sea, and are eventually washed up on the coastline. The illegal incineration of the nets has been reported. According to recent beach litter monitoring data gathered by iSea, more than 250 mussel nets are found per 100-metre stretch of coastline.

“This extremely large number of mussel nets found on the coastline of Chalastra highlights one of the most frequent misunderstandings when it comes to the actual sources of marine litter in Greece and the wider Mediterranean”, says Ms Thomais Vlachogianni (MIO-ECSDE).

“Oftentimes, the litter inputs of the fisheries and aquaculture sector are largely underestimated, due to the fact that the majority of beach litter surveys are carried out in tourism and recreational destinations, thus reflecting the pressure of tourism and recreational activities. In addition to Chalastra, there are many other areas that are heavily impacted by derelict fishing gear. Tackling their high abundance, which in some cases is tenfold higher than the recently set EU beach litter threshold value of 20 litter items per 100-metre stretch, will require tailor-made measures addressing the fisheries and aquaculture sector in order to attain good environmental status”.

This Plastic Busters MPAs’ demo provided the framework for a potential solution to the problem of derelict mussel nets in the Chalastra area. Initially, beach litter monitoring activities were carried out to assess the presence of abandoned, lost and/or discarded fishing gear (ALDFG). The data obtained were used to raise the awareness of local communities and engage all stakeholders in setting up a derelict fishing gear management scheme. Collection points for ALDFG were set up in several locations, and the logistics associated with the full value chain of recycling (collection, cleaning, segregation, transportation) were defined, while best practices for the proper collection and management of ALDFG were disseminated to the local fisheries and aquaculture sector.

The pilot action in Chalastra serves merely as a starting point for our future activities, as we plan to replicate it in all mussel farms in the Thermaikos Gulf. This pilot action provided us with a blueprint for concrete in-the-field actions aimed at ensuring the sustainable management of derelict fishing gear and long-term positive environmental benefits, says Ms Anastasia Charitou, iSea Programme Officer.

According to Ms Charitou, one of the highlights of the action was the active involvement of the local communities. In particular, the mussel farmers and the fishermen welcomed the action and contributed substantially to its success. The pilot action was implemented in close collaboration with the Municipality of Delta and the local Fisheries and Mussel-farming Association of the Municipality of Delta.